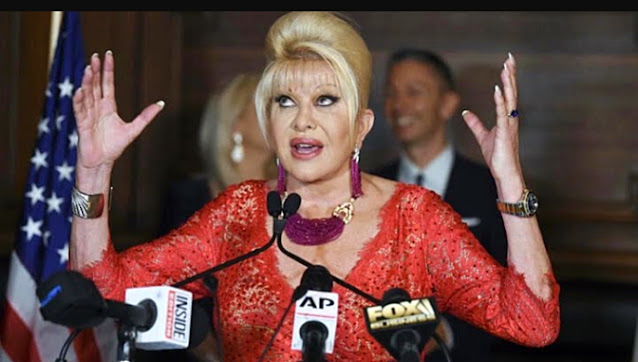 The former president of the United States, Donald Trump, announced on his 'Truth Social' account the death of his first wife. Ivana Trump was largely responsible for building the Trump real estate empire and they became one of the hottest couples on the New York scene in the 1980s.

Ivana Trump died at the age of 73 due to cardiac arrest.  She was the first wife of former United States President Donald Trump, who announced the death on her 'Truth Social' account: "I am sad to inform those who loved her, which are many, that Ivana Trump passed away at her home in the city ​​of New York," the former president wrote.

She was the mother of Donald Jr., Ivana and Eric, who mourned her death in a joint statement: "She was an incredible woman: a force in business, a world-class athlete, a radiant beauty, and a loving mother and friend Ivana Trump was a survivor."

She was born in Zlin, in the former Czechoslovakia, where she was a top-level skier, competing on the junior national team before graduating in physical education in Prague.  She married an Austrian instructor, Alfred Winklmayr, whom she quickly divorced and from whom she was able to receive an Austrian passport to flee to Canada.

The fashionable couple in the 80s

In 1977, Ivana and Donald got married and during the 1980s they became one of the most fashionable couples in New York.  Ivana had great responsibility in building the Trump empire, being her partner behind the scenes, and responsible for the development of the Trump Tower or the Trump Taj Mahal Casino Resort in Atlantic City, among others.  She was also vice president of interior design for the Trump Organization and managed the historic Plaza Hotel.

This real estate power allowed them to build a fortune of more than three billion dollars, with which they entered New York high society, appearing both in gossip magazines and in   gags   on the popular comedy television show 'Saturday Night Live'.

In addition to participating in the Trump empire, Ivana designed clothing, jewelry, and beauty products;  she invested in property and wrote several books.

In 1992, the first marriage of the former president of the United States ended, in a breakup that made the covers of the pink press.  The trigger was an affair of Donald Trump with Maria Maples, who would become his second wife.

The relationship took a turn for the worse and Ivana Trump went so far as to accuse Donald Trump of rape in an affidavit, which would later clarify that this was how she felt.

She became an iconic ex-wife, appearing in the 1996 film The First Wives Club and uttering a line that is now part of movie history: "Ladies, you have to be strong and independent, and remember, don't get mad, get mad." it all."

In the biography of their marriage, 'Raising Trump', published in 2017, Ivana also mentioned parenting in the introduction, assuring that she was solely responsible during all phases.

In recent years, the relationship between the two improved.  Ivana supported the tycoon in his 2016 candidacy and gave him the nickname "The Donald".  She assured the newspaper 'The New York Post' that she was an adviser and supporter, at the same time, of her ex-husband.

He also said that they spoke every two weeks, that he had a direct line with him and that above all he advised him before and after public appearances.

However, Ivana confessed to the television program 'Good Morning America' that she did not like to call the White House frequently so as not to bother Melania Trump, Donald's current and third wife.  And she, I joke, with the fact that she was Trump's first wife: "I'm the first lady, okay?"